EVERY $25 SPENT EARNS YOU 100 POINTS AND $1 THAT CAN USED TOWARD FUTURE PURCHASES. 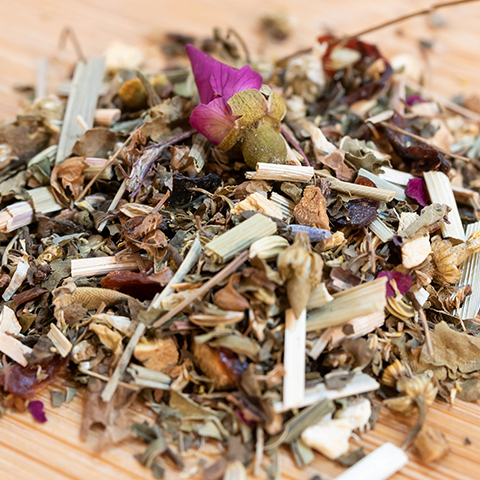 Tummy aches, indigestion, and menstrual cramps are some of the ailments chamomile can soothe. Here’s what to know about chamomile benefits.

Chamomile for what ails you

Sipping chamomile tea is an often-cited home remedy for better sleep—brew a cup before bed and feel sleepy and relaxed by the time your head hits the pillow.

But the tea’s benefits go beyond soothing restless minds. And it’s all thanks to the tiny chamomile flower.

Chamomile is an herb that produces small white flowers that may seem insignificant but have been used throughout history to make teas, tinctures, and liquid extracts.

“Chamomile has been used extensively over the centuries for many conditions, especially prior to modern medicine,” says Brenda Braslow, a Colorado-based registered dietitian nutritionist with the nutrition tracking app MyNetDiary.

She names headaches, anxiety, insomnia, skin conditions, and reproductive disorders as among the conditions chamomile is used to treat. Those, and belly aches.

The herb is part of the Asteraceae family, which also includes the purple coneflower (Echinacea), marigold, daisy, and sunflower.

There are two main varieties of chamomile. English, or Roman, chamomile (Chamaemelum nobile) is native to Western Europe and Northern Africa. German chamomile (Matricaria chamomilla) is typically found throughout Europe and Asia.

Both are similar in their medicinal properties, but their growing needs and appearances are a bit different. German chamomile tends to have feather-like leaves, while Roman chamomile has foliage more reminiscent of a fern.

Chamomile can easily grow unnoticed in a backyard or in the wild, with humble flowers that don’t rival its showier cousins.

The tea you drink is made from those flowers, each tiny and white petaled with a yellow center. They’re harvested and dried before being sold as loose-leaf tea or scooped into teabags.

Chamomile contains compounds that may boost your health.

“The petals contain many bioactive chemicals, such as apigenin, quercetin, and nobilin, which have been shown to have a range of potential benefits, ranging from calming effects to helping with sleep to starving cancer to reducing gastrointestinal upset,” says William Li, MD, a physician, scientist, and author of Eat To Beat Disease.

Braslow agrees that chamomile can potentially help your health. “Chamomile tea contains many antioxidants and anti-inflammatory compounds,” she says.

But before you load up on the tea, know this: research on chamomile’s benefits is far from conclusive.

Although there are some short-term studies that highlight the effects of chamomile, more long-term studies and human trials are needed before scientists can draw any concrete conclusions.

Still, the eight potential chamomile benefits below may convince you to brew some chamomile tea tonight.

Each month, give or take, women can have some not-so-pleasant cramping due to their periods.

Chamomile has antispasmodic properties, which means it might relieve pain from muscle spasms.

“Chamomile contains a bioactive chemical called spiroether, which has antispasmodic effects. This is thought to be why chamomile can help alleviate menstrual cramps,” says Dr. Li.

There have been more than 20 clinical trials conducted looking at chamomile as a source of relief for premenstrual cramps, and evidence shows it can reduce the severity of PMS symptoms, he says.

May help the heart

“The antioxidant activity of chamomile also may protect the vascular cells lining blood vessels, which is critical for heart health,” says Dr. Li, who is also the president and medical director of the Angiogenesis Foundation, which focuses on medicine that relates to the growth of new capillary blood vessels in the body.

They key antioxidants are flavonoids, plant compounds found in many fruits and vegetables. They’re believed to provide health benefits.

“It has been suggested that regular use of flavonoids consumed in food may reduce the risk of death from coronary heart disease in elderly men—and chamomile has a fair amount of flavonoids,” says Rissetto.

Helps you get better sleep

Chamomile is often associated with aiding insomnia and for getting a good night’s rest.

“Chamomile has been shown to improve sleep quality, especially in the elderly. The effect is thought to be due to the bioactive apigenin that binds to the benzodiazepine receptor in the brain,” says Dr. Li. “These are the same brain receptors that are activated by medications sometimes used to aid sleep, like Xanax and Valium,” Dr. Li says.

In 2014, a randomized control trial was conducted on 77 elderly individuals in a nursing home to test if chamomile extract could help improve sleep quality.

The results, which were published in 2017 in the Journal of Education and Health Promotion, showed chamomile had sedative properties.

Still, more studies are needed before we know for sure whether chamomile can help you catch some z’s.

For ages, chamomile tea or herbal infusion has been drunk as a folk remedy for easing an upset stomach and aiding digestion.

“Chamomile has been used for centuries by people to soothe their stomach and to treat a variety of digestive issues, including upset stomach, gas, and ulcers,” says Braslow.

The same properties that make chamomile a good choice for period cramps help tummy aches too.

“The antispasmodic properties of spiroether, which is found in chamomile, help to explain its benefits for an upset stomach,” says Dr. Li.

But there’s little harm (more on that below) in sipping a chamomile drink when you have a belly ache. “If you have an occasional stomach upset, it may be helpful to drink a cup of chamomile tea,” she says.

May ease stress and anxiety

“One of the natural bioactive chemicals in chamomile is apigenin, which can activate brain receptors that help reduce anxiety and induce sleep,” Dr. Li.

Chamomile probably won’t replace your anxiety meds (nor should it), but it might be an add-on treatment for easing stress and anxiety.

“It might be useful to drink chamomile tea to calm your nerves when you have occasional anxiety or stress,” says Braslow. “However, there is limited research with small sample sizes to support its use for treating anxiety disorders.”

May help the immune system

“Chamomile has been shown to lower inflammation, which is part of the immune system, which may explain its benefits for relieving the symptoms of a cold,” says Dr. Li.

Occasionally, chamomile is used as a remedy in the form of a salve or paste to treat acne.

“Chamomile has antibacterial and anti-inflammatory properties, so it is commonly used topically to treat acne,” says Braslow.

But consult with a pro before covering your face in chamomile.

“While a paste made with ground chamomile may have anti-inflammatory properties, you should consult with a dermatologist to decide if this is the best way to treat the skin,” says Dr. Li.

Risks or side effects

Like other herbs and medications, chamomile can have side effects. Here are some allergies and risks to pay attention to.

There is always a possibility someone can have an allergy to chamomile.

“Chamomile is in the same family as ragweed, chrysanthemums, marigolds, and daisies, so it could potentially cause an allergic reaction in individuals allergic to these plants, which could occur when taken orally or used on the skin,” says Braslow. “Allergic reactions could include chest tightness, wheezing, skin irritation, rash, hives, itching, and vomiting.”

If you have hay fever, you may want to check if you’re allergic to chamomile by getting an allergy test at the doctor’s office before you start drinking the stuff.

“People who have severe hay fever may have an allergic-type reaction to chamomile,” says Dr. Li.

It’s pretty rare for anyone to have a severe allergic reaction to chamomile, but it can happen.

“According to the National Center for Complementary and Integrative Health [NCCIH], there have been a few reported cases of severe allergic reactions occurring after persons consumed chamomile products,” says Braslow.

It can thin blood

Chamomile has coumarin in it, a natural blood-thinning substance.

“It should never be used by people taking blood-thinning medication, like Coumadin, because it could have a dangerous additive effect,” says Braslow.

Its ability to think the blood is why you should stop using it two weeks before or after surgery, she says.

It can cause drowsiness

Chamomile can make you sleepy or drowsy. While that makes it a good beverage to sip before sleep, it’s a reason to avoid the tea before driving.

“Because chamomile can cause drowsiness, it should not be taken before driving or operating heavy machinery,” says Dr. Li.

How much chamomile tea should you drink?

“Drinking one to three cups a day of chamomile, especially if one is before bedtime, may be beneficial for its calming effects, ” says Dr. Li.

For health benefits, such as to treat occasional anxiety or stress or to soothe an upset stomach, it may be helpful to have a cup of chamomile tea, according to Braslow.

“As with anything,” she says, “moderation is always wise to prevent any undesired side effects.”

What to know before you buy

Herbs and herbal supplements aren’t regulated by the Food and Drug Administration (FDA), so it’s important to do your research and speak with medical professionals before using them, especially if you’re aiming to treat specific conditions.

“Unlike medications, herbal supplements are not regulated with oversight for quality control, for the accuracy of a specific substance quantity, or the presence of other ingredients,” says Braslow. “Basically, you are on your own to monitor whether you derive benefits, will have herb-medication side effects, or have negative side effects from taking it.”

But before you start drinking chamomile tea or taking other forms of chamomile, speak with your health care provider, especially if you have a health condition or are taking medications.

“If you have medical conditions or take other medicines, it is smart to ask your doctor or pharmacist if it is safe for you to take chamomile, especially if you are planning to take a potent extract of chamomile in the form of a tincture or supplement,” says Braslow.

Be the first to get updates and more!

Be the first to get updates and more!
Scroll Back to Top
0
0
Your Cart
Your cart is empty
Continue Shopping